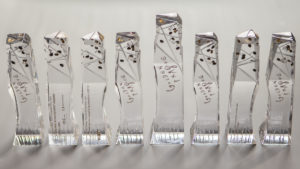 Principal Guest Conductor Jakub Hrůša, the Czech Philharmonic and violinist Lisa Batiashvili have been awarded the prestigious Czech Crystal at the 58th Golden Prague International Television Festival. The programme, Spring Stars of the Czech Philharmonic III, was broadcast on 27 September on the ČT Art culture channel.

The winner was selected by an international jury chaired by the legendary director Brian Large, holder of two Emmy Awards.

The Award organisation writes, “The Czech Philharmonic concert recorded in Rudolfinum during Covid times is remarkable in creating magical music atmosphere in an empty hall using beautiful lightning effects. The viewer is drawn into the space of the concert hall in a beautiful and magical way. The orchestra, the violin soloist and a conductor are presented in a beautiful musical fashion. The production is moving yet subtle without drawing attention to itself. It was a pleasure to hear Czech music, Dvořák‘s music, being performed in a gentle, yet expressive way.”

Tomáš Motl, Golden Prague Director and Executive Director of the ČT Art Channel said, “This year’s season has sent a clear signal that not even empty theaters with no spectators will prevent artists, both at home and abroad, from creating outstanding productions that bring genuine, live art to people’s home thanks to television broadcasts, despite the damage caused by the COVID-19 pandemic. In addition, and perhaps more importantly, this edition of the festival has brought hope that the worst is now behind us. Thanks to the festival and Czech Television, producers and creators from the world over were able to meet in person following a two-year hiatus, which means that Golden Prague will forever remain as a symbol of a new beginning.”